The oil coolers on Continental engines often mount directly to the engine and do not require hoses. There are several types and variations of these oil coolers. The following describes how to identify each type. Go to AERO-Classic Continental Engine Oil Coolers or AERO-Classics Engine-Mount Oil Cooler FAA-PMA Eligibility for more information.

Rear-Mount
These mount directly to the rear of the engine. 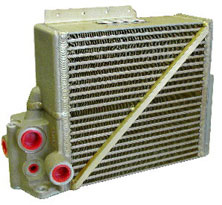 These mount directly to the front of the engine and have an 8 bolt mounting pattern. 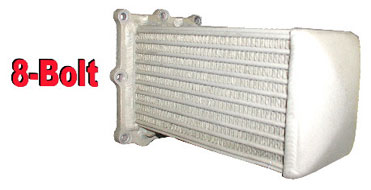 These mount directly to the front of the engine and have a 12 bolt mounting pattern.
To correctly identify this type of oil cooler, look for the following features: 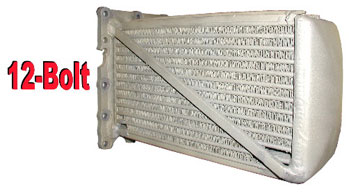 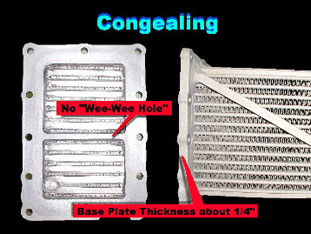 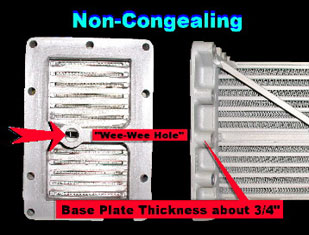 Engine oil thickens at cold temperatures, this thickening is commonly referred to as congealing. Even though it is bolted to a warm engine, it is possible for a congealing type oil cooler to remain cold enough to cause the engine oil inside it to remain cold and thick (congealed). When the engine warms up to about 160-180F the vernatherm directs oil into the oil cooler, but if there is congealed oil in the cooler, it can take a considerable amount of time for oil to begin to flow through the oil cooler.

To avoid this situation, Non-Congealing oil coolers were designed to have a small - but continuous - amount of engine oil flowing through them at all times - even when the vernatherm is in full oil cooler by-pass mode at low oil temps. Non-Congealing oil coolers feature what is (non-technically) referred to as a "Wee-Wee Hole" (as in the picture above, right). This "Wee-Wee Hole" is a passageway running through the center of the oil cooler, through which a constant supply warm engine oil is pumped. This keeps the oil cooler - and the roughly two quarts of oil it contains, at (or near) the temperature of the engine. This way, engine oil can easily flow through the oil cooler the very instant that its flow is directed there via the vernatherm.

A congealing or non-congealing oil cooler can be identified by the thickness of the base plate and the presence of the "wee-wee hole" as indicated in the pictures above. 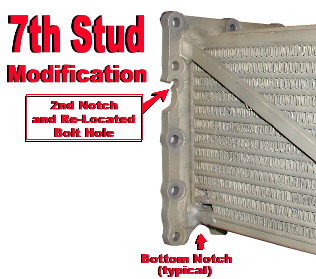 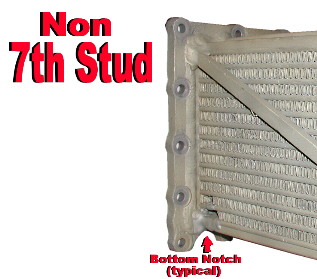 TCM's 7th cylinder hold-down stud modification affects both types of 12-Bolt oil coolers; Congealing, and Non-Congealing (in the above examples, a Congealing type oil cooler is shown). All 12-Bolt oil coolers have a single half-moon cut-out in the base plate's bottom edge. If there's a second such cut-out along one of the vertical edges of the cooler's base plate, then you've got a 7th Stud type of oil cooler. This added notch in the cooler - along with a re-located oil cooler attachment bolt-hole, provides clearance for the added 7th cylinder hold-down stud. 7th Stud type coolers also require the appropriate 7th Stud adaptor plate and gasket. 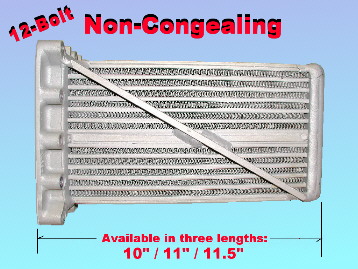 12-Bolt, Non-Congealing Continental oil coolers are available in three different lengths: 10", 11", and 11.5" - as measured from the gasket surface of the cooler's base plate, to the furthest reaching part of the tank on the opposite end of the oil cooler.

(Images and text adapted from www.oilcoolers.com)