Better seal at half the price!
In addition to the Cessna fuel strainer seals already available, McFarlane now has FAA-PMA approved gaskets, o-rings, and Stat-O-Seals required to re-seal most Piper fuel strainers. Many of the new seals feature fuel proof fluorocarbon that won't swell or degrade like the original Buna N seals. 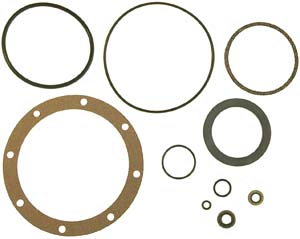 We also have FAA-PMA approval to replace the copper crush gaskets on the Apaches, Aztecs, and Seminoles with stainless steel/fluorocarbon Stat-O-Seals. During inspection of these fuel strainers, the upper and lower seals must be replaced. The old copper crush gaskets used for the lower seal are unreliable and poorly suited for sealing against the small lip of the bottom of the fuel bowl. They often require several attempts to get a satisfactory seal. With our improved Viton Stat-O-Seal design a positive seal is easy to achieve!

All seals may be purchased separately or as convenient kits that contain both the upper and lower seal for one fuel strainer.