The founder, Dave McFarlane, created McFarlane Aviation in 1970. The company did aircraft repair and restoration part time while Dave concentrated on agricultural aviation activities in Mississippi, Arkansas, and Iowa. In 1978 Dave bought the Vinland Valley Aerodrome (K64) and moved the company there where it is located today. The quaint little country airport is located in Eastern Kansas ten miles southeast of Lawrence Kansas, the home of Kansas University and Haskell Indian Nations University and four miles North of Baldwin City, the home of Baker University. The runway was built in a beautiful Valley on the old railroad right-of-way in Vinland, Kansas, a pioneer ghost town. A few old store buildings, two old churches, several houses, and the oldest library in Kansas are all that remains of the once thriving frontier settlement. Fred McClenahan joined Dave and his wife Phylis there and they provided aircraft repair, restoration, rental, flight instruction, and agricultural aviation services. Fred plays a key role today in developing and testing the McFarlane product line.

The company prospered and grew and in 1986 it was incorporated as McFarlane Aviation, Inc. As the years went by, it became apparent to Dave and Fred, that there was a need for improvement in many of the aircraft parts they were installing. It was difficult to explain to customers why they paid so much for a part that had to be replaced again a few years later. In 1989 the company started in a new direction. Improved designs and new materials were developed and tested for the Cessna seat rollers and washers. Aircraft owners accepted them as being far superior to the OEM parts while costing much less. Sales of these first products grew rapidly and customers requested more products. New replacement parts were developed and approved by the FAA while manufacturing equipment, talented people, and quality control systems were added and improved. The manufacturing activity grew rapidly and by 1993 all other operations except for basic airport services were sadly phased out. Since then, the company has focused only on the development, testing, manufacturing, and distribution of quality FAA-PMA products. In 1997 an additional 9,500 square feet of office and manufacturing space was constructed. In 2012 the facility was doubled in size by adding 24,000 square feet of production and warehouse space (photos), and McFarlane added another 24,000 square feet (photos) again in 2016 and 2020. Today McFarlane holds design approval and FAA-PMA for thousands of different replacement parts for several different makes of light aircraft. McFarlane distributors are serving major aviation centers around the world.

The experience of the past and constant input from knowledgeable customers have given McFarlane engineers vast knowledge of aircraft service demands that are the foundation of improved products. The pioneering spirit lives on in Vinland, Kansas and McFarlane Aviation will continue to develop innovative solutions for light aircraft service problems.

Vinland, Kansas and McFarlane Aviation Products from the air. November 2016 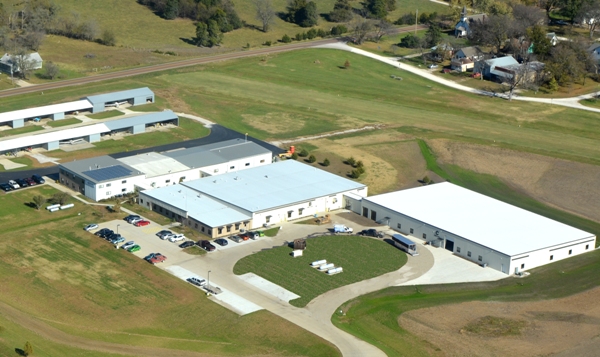