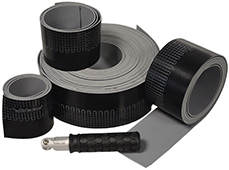 Typical silicone rubber baffle seals have a coefficient of friction among the highest of any known material. This friction transfers engine vibration into your cowl and firewall causing fastener fretting, fatigue, cracking, chafing and airframe vibration.

Bi-Flex™ Technology utilizes a laser engraved waffle pattern to provide the ideal flexible seal for maximum cooling, while retaining rigidity on the lower half of the seal to prevent the baffle seal from blowing past the proper seal position against the cowl.

Not finding what your looking for?