How McFarlane Cables are Swaged and Why it Matters

The recently published FAA AD 2013-02-13 affecting many Piper aircraft and the NTSB recommendations that preceded it, indicate that the reported stabilator system failures were the result of stress corrosion cracking of the stainless steel cable terminals. Although this is likely true, based on our extensive testing of swaged cable fabrication methods, we have found some swaging methods are better than others in limiting the residual stresses and micro cracks that can lead to accelerated stress corrosion cracking in swaged terminals.

In particular, we have found that using an "air hammer" type of swager on long terminals (such as turnbuckle terminals) results in significant residual stress and work hardening of the terminal. This is because every time the air hammer strikes the terminal, the inertia of the long terminal causes it to bend slightly. In extreme cases, this repeated bending back and forth can lead to fracture of the terminal during swaging. In less extreme but more insidious cases, it can lead to internal micro cracks or just internal stress that may not be discovered during pull-testing but can accelerate a stress corrosion cracking process.

Based on this knowledge, we long ago invested heavily in industrial rotary swaging machines that do not have this problem even though the cheaper air swagers are still allowed by the military specifications that dictate the manufacturing methods for aircraft cable assemblies. Although the use of rotary swagers as opposed to air hammers does not totally preclude the possibility of a cable terminal failing due to stress corrosion cracking, we feel it does make our cables significantly safer than those manufactured with alternative methods. 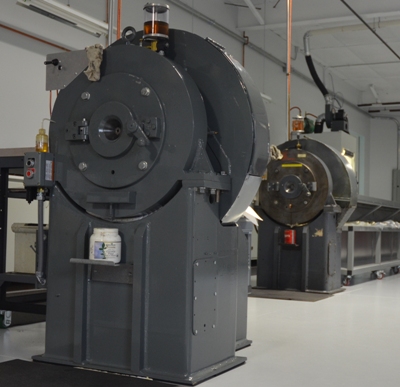